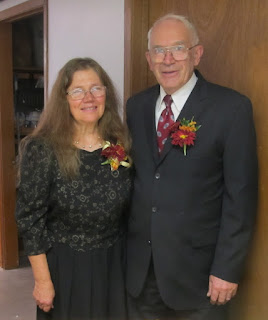 Pastor Krahn was born and raised in the Warroad area.  He graduated from the Warroad High School and went on to get his pastors degree from Briercrest Bible Institute.  He married his wife Cynthia in 1961 and they had four children who are now grown and married.  Three of the children and their families who live in the area also attend Family Fundamental Church.  Pastor Krahn and his wife spent several years working for Child Evangelism Fellowship in Oklahoma and South Dakota before settling down in Warroad.  Pastor Krahn had several jobs but spent most of his years working for Marvin Windows and Doors in Warroad as a purchasing agent and Special Projects Manager before retiring in 2008.  The Krahn's were one of the four families that started Family Fundamental Church in 1993.  The following year he became pastor and continues on to today.  Aside from being the shepherd of the church, Pastor Krahn also grain farms and enjoys his many grandchildren and great grandchildren.  ﻿